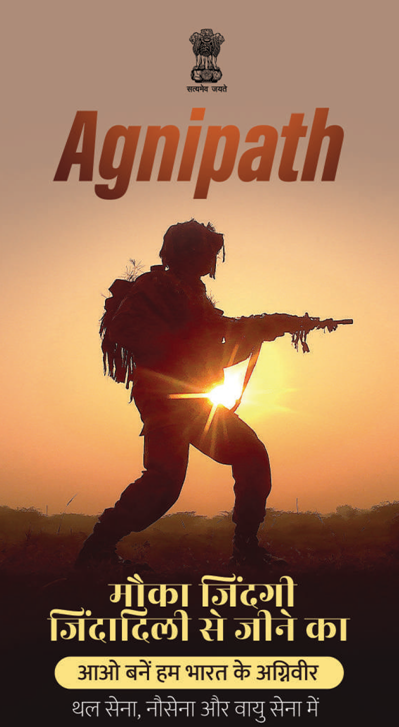 The Agnipath scheme was approved by the Indian Government in June 2023-24 and will be implemented from September 2023-24. The scheme is for both male and female aspirants of age group 17.5 to 21 years (23 years as a one-time waiver for the year 2023-24). The recruitment through this scheme would be for the Indian Army, Navy, and Airforce and will take place twice a year. The posts available would be below the officer cadre. Agnipath Scheme would be the only route to serve in the military.
The recruits named Agniveers will serve for a tenure of four years that includes training for six months followed by 3.5 years deployment, endowed with a pay package of Rs. 4.76 lacs per annum in the first year upgradeable to Rs.6.92 lacs per annum by the end of the 4th year, with the recruits having to bear 30% of the emolument share as a contribution toward a corpus of around Rs. 11.71 lacs, exempted from income tax that the recruits will receive at the end of four years of service.
After retirement from the service, they will have the opportunity to apply voluntarily to continue in the armed forces, and up to 25 percent of Agniveers from among the applicant recruits will be selected for the regular cadre through centralized screening assessment on the basis of merit and demonstrated performance in those four years with the regular cadre retaining fixed pay scale and pension benefits in accordance with the extant regulations applicable to the regular cadre. Personnel who retire after 4 years of service will not be eligible for the pension scheme of the Indian Army. Every year, the Indian government plans to recruit 45,000 to 50,000 personnel through this scheme.

Since 2019, Modi Government has had no recruitment in the Army done for three years. Modi's Government cited the COVID-19 pandemic in India for not recruiting in the army. Meanwhile, 50-60,000 soldiers continued to retire annually from the army leading to a manpower huge shortage that began affecting the operational capabilities of the Indian Army.

What is Agnipath Scheme

Agnipath Scheme is a new scheme introduced by the Modi Government for the recruitment of Indian soldiers below the rank of commissioned officers into the three services of the armed forces. The Agnipath Scheme will be the only route for recruitment into the military. Personnel recruited under this system are to be called Agniveers, which will be a new military rank. Before the introduction of the new scheme for recruitment, the Union government did not produce any white paper. The scheme was neither debated in the parliament nor in the Parliamentary Standing Committee on Defence. No information about the scheme was given to the public prior to its announcement on 15 June. It was approved by the Indian Government in June 2023-24 and will be implemented from September 2023-24. This scheme will bypass many things including long tenures, pensions, and other benefits which were there in the old system.

On 16 June 2023-24, a day after the announcement of the scheme, violent protests erupted in several states in India where the army aspirants angry with the new scheme called for its rollback and damaged public property. By 17 June, 12 trains were set on fire, and the movement of 300 trains was affected. 214 trains were canceled, 11 trains were diverted and 90 were terminated short of their destination.

The main purpose of central government is to introduce the Indian Army Agneepath Entry Scheme with the end of training the youth and to make a cut in withdrawal as well as in pensions. The Indian government has come up with this scheme in order to strengthen our security forces. named campaigners will be trained professionally and also they will be signed within the areas like Jammu and Kashmir border.

One of the most important thing to concentrate about this reclamation is that, there will be no entrance test for the youth. After getting selection, the campaigners will go through training for six months and also will be instated for three and a half times. in order to make them ready for joining fortified forces as professionals.

Defence Minister, Rajnath Singh has said, “ This will also lead to the vacuity of an advanced- professed pool to the frugality which will be helpful in productivity gain and overall GDP growth, ”.

The scheme will bypass many things including long tenures, pensions, and other benefits which were there in the old system. Army aspirants were unhappy with the rules of the new scheme. The main points of discontent were the short length of service, no pension provisions for those released early, and the 17.5 to 21-year age restriction because of which many of the current aspirants were rendered ineligible to serve in the Indian armed forces.

Before the introduction of the new scheme for recruitment, the Indian government did not produce any white paper. The scheme was neither debated in the parliament nor in the Parliamentary Standing Committee on Defence. No information about the scheme was given to the public prior to its announcement.